Kamakura, Japan — March 24, 2017 — 16Lab, developer of OZON™ – a platform for next-generation computing experience – joined the Japan pavilion at one of the largest tech events in the world, CeBIT, in Hannover, Germany. The participation was sponsored by NEDO, a Japanese government’s research promotion agency.

In 2017, Japan was an official partner country for CeBIT. Japanese Prime Minister Shinzo Abe himself graced the exhibition, and had a speech with German Chancellor Angela Merkel.

According to CeBIT, around 200,000 visitors attended the event. The Japan pavilion, in particular, gathered a good amount of audience, and valuable connections were established both globally as well as within other Japanese startups and companies. During the event, 16Lab was honored to make a presentation at the Japan Pavilion’s official stage. 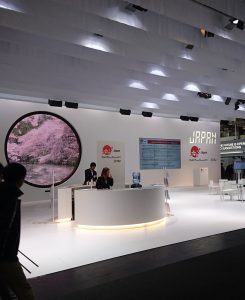